Nobody likes potholes, but they are a reality that pop up every spring. Potholes are a result of the freeze/thaw weather cycles that deteriorate our road surfaces. During the freeze/thaw (which are occurring more and more often) water seeps into the cracks of the road. Fluctuations in temperature, vibrations and traffic volumes all create stress on the asphalt road surface, which can result in potholes.

High traffic volume can increase the depth of potholes; therefore, arterial roads are likely to see a much higher concentration of potholes.

The City fixes potholes by removing excess water or debris, filling it with asphalt and then packing it down. Up until a few years ago, only cold-mix asphalt was used but now in the warmer months we use a hot asphalt mix from local facilities. Hot asphalt is better at bonding and is, thus, more permanent. Other than this change, our pothole fixing process hasn’t changed very much over the years.

Recently, however, there has been some evolution of asphalt mixing. Queen’s University professor Simon Hesp is a chemist and chemical engineer who has made great strides in road science.

Professor Hesp believes the problem with Ontario’s asphalt is that engine oil is being used as an additive. He believes we should be using asphalt containing pure Alberta crude. This improved asphalt (called LS-308) costs 10 to 15 percent more, but greatly extends a road’s life cycle. However, it wouldn’t help to simply fill potholes with LS-308, the road needs to be entirely composed of LS-308, which can only occur during a full reconstruction.

The City of Kingstown has been using LS-308 since 2009, and more recently Durham, Niagara, Peel, Timmins, Toronto, Waterloo, and York have been doing trials. In 2016, the provincial government stated that LS-308 will be phased into future provincial contracts.

Ottawa is continuously looking at ways to improve how roads are built and renewed. Infrastructure Services is continuously reviewing standards and recommendations, including connecting with other municipalities in Canada.

New technologies for road repair are reviewed continuously through academic and research documentation provided by universities, colleges, the National Research Council of Canada and local and provincial construction associations.

The requirement for LS-308 was added to the construction specifications in March 2016 and was applied to 2017 contracts. The addition of LS-308, among other changes to the city’s asphalt specifications, are intended to provide longer pavement life cycles. 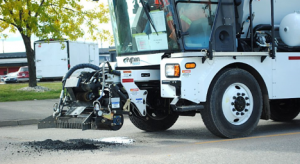